HOW TO: Convert from dual alternators to single alternator :TECH FILE

Joined Oct 23, 2011
·
8,776 Posts
This is for those of you who have dual alternators and wanted to switch to just a single alternator setup for whatever reason. It took me a LONG time of searching to find the information needed to complete what would seem to be a simple task of remove and call it good. However that isn't the case with these trucks and in a second you will see why.

Not sure how many knew this but my truck originally had dual alternators from the factory. Now the way the ECM is setup it randomly selects which alternator to use to charge the system each time the truck is started. That means you CANNOT simply unplug the second alternator and go on, because should you do that and the ECM selects the alternator that is no longer there, the truck will drain the batteries and leave you stranded.

All that said there is a simple work around.

On the passenger side fender well there is a harness that the factory dual alternator plugs into. When you remove the second ALT the harness needs to come out too.

It plugs in right here.


Those of you who don't have a second ALT will see a little "loop back plug" in the end of the harness. This is what you need to replicate with the factory dual ALT harness.

Remove the old harness and find the plug that looks like this.


I had already modified this one before I took this pic. But the green loop back is what you need to worry about. You have to change the pin out locations for the green wire and remove the others.

To do that you need to take and pull the rubber stop out so you can access the release pin.

Once you have removed the red tab, proceed to remove the other wires and pins and put the two green pins in the location you see here, then button it back up and plug it into the factory harness along the fender well and you are DONE.

I only had to do this because I have decided to use fire hoses for injectors and needed a twin pump setup and the way they mount to the head you can't utilize a dual ALT.

CrazyS0b said:
Great write up, love seeing these. Btw, I may or may not need to see a video of your truck unleashing said fire hoses... PWEEEEEEZZZZ!!!!! :dis: :icon_ford:
Click to expand...

Won't be til late spring. LOL.

Question: I was looking to go from single to dual alternators because I want to run a large welder. Can you give me any pointers. I'm starting a rebuild right now so now would be the time to change. If your looking to get rid of the second alternator mount I can swap out what ever parts you need.

here is the PDF for a dual to single procedure https://www.google.com/url?sa=t&rct=j&q=&esrc=s&source=web&cd=8&ved=0CFYQFjAH&url=https://www.fleet.ford.com/truckbbas/non-html/Q91.pdf&ei=5I3LVMyKDs6ZyASxmoHgCw&usg=AFQjCNFU8UlSDxqxdD9gGGRjIFqa1iHHIw&sig2=8SfAl0-jD3XsNx5xCnQEJA

Joined Feb 5, 2008
·
29,378 Posts
if you notice it says it's not recommended to go single to dual
but it's been done by just adding all the parts it seems that even though the PCM ( pcm does not interact with a single alt) does control what alternator is primary randomly you do not have to reflash the PCM to let it know it has a dual vs single
atleast t hats what it looks like

Question: I was looking to go from single to dual alternators because I want to run a large welder. Can you give me any pointers. I'm starting a rebuild right now so now would be the time to change. If your looking to get rid of the second alternator mount I can swap out what ever parts you need.

here is the PDF for a dual to single procedure https://www.google.com/url?sa=t&rct=j&q=&esrc=s&source=web&cd=8&ved=0CFYQFjAH&url=https://www.fleet.ford.com/truckbbas/non-html/Q91.pdf&ei=5I3LVMyKDs6ZyASxmoHgCw&usg=AFQjCNFU8UlSDxqxdD9gGGRjIFqa1iHHIw&sig2=8SfAl0-jD3XsNx5xCnQEJA
Click to expand...

Great advice... just to pile on, in no way should you try that on your trucks primary system.

If you cant do a stand alone, You may be able to run dual alternators and dedicate on altwernator to a Semi group (31, 8D, 4D, 4DLT) battery and run it off of its own circuit.

I am dreaming up a plan to do this my self, just never executed it.

I have a small farm and am always needing to weld here or there or use some kind of power source in the middle of nowhere so I thought maybe I can add a second alternator to handle the juice needed.

Joined Feb 6, 2015
·
2 Posts
This thread may be a COMPLETE life saver! I bought a truck recently that has been plagued with wiring issues (ran great until 3 hours after purchase and 1 hour past inspection period lapsed... naturally).

So the previous owner eliminated the second alt. Only instead of jumping pins, it appears they cut out the entire harness. the green/red wire is run from the main engine harness to the top alternator. same for the other wire on the alternator plug. they then ran a single wire all the way to a three prong plug on a small white topped box just above where the plug you jumped the pins on connect. (that box is part number >pa66-gf33<

Here are photos of what was done..... I'm having an issue that half the time I start the truck it doesn't charge. Alt and batt's bench test fine, I was starting to think because after the glow plugs cycled, the voltage never jumped up at all that perhaps the gpcm was randomly stuck on and it was a draw not a no charge issue... however I for the life of me have struck out trying to figure out how the wiring was SUPPOSE to be from the factory.

Any clue how I can correct this? or is this a hack job way of working around the factory harness that should have been there? It makes ZERO sense to me why they would have cut out that section of harness... I've never seen the bay of another 6.0 or have one in my area to compare it to. Hopefully someone has an idea of what's going on or what I need to do to repair/replace it!!! This has caused me to skip a few days of work to try and sort out! (Only vehicle that's street legal now) 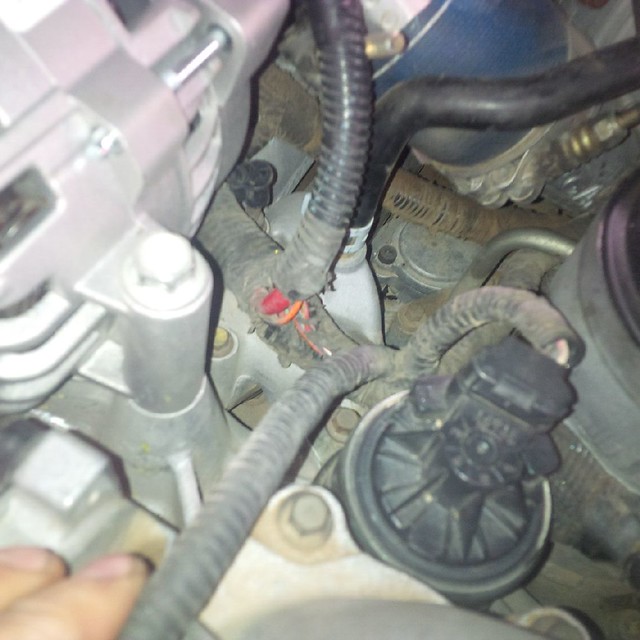 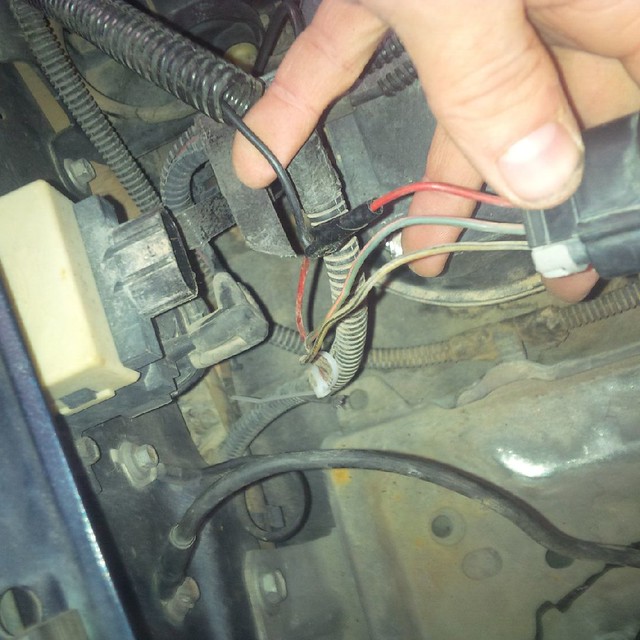 
There was a second harness that seemed stand alone on the 2nd alternator.... it had a plug like the one you referenced with 5 pins (white/yellow that were jumpers and green/red jumper and yellow output to alternator plug.. (was dangling between the engine and the fender), a battery to alt with 2 fusible links, a red/green to alt with fusible link. I'm guessing there was initially some sort of harness that split Y'd out so to speak to this and another to the referenced plug on the passenger fender? If you have any idea whats missing/where it ties in I'd be forever in your debt!

EDIT: looking at this and the harness/jumper you added/the plugs I have one of two conclusions....
a.) by eliminating that section of harness they essentially did the jumper by splicing directly into the red/green at the harness near the upper alternator making this semi correct but i'm missing the purpose of running that black wire to the red wire on the fender...

b.) still not understanding why they black wire is there, they simply botched the job and the jumper should have been added to the fender connector (that isn't connected to anything) and I need to just add a plug/jumper there? (than what should I do about that black wire running to the alt)?
A

Joined Feb 6, 2015
·
2 Posts
After further studying your images, I discovered the jumper you created was out of the original plug from the harness which needed to be cut away. (I speculate from the 2nd alt's harness). I made that piece and am now going to clean out the plug on the fender and pop it on. I'm still curious if anyone has a clue why there is the black wire spliced in to the red/green at the alt itself. I feel like it should be removed and is there for no reason. Correct me if I'm wrong.

Thank you! (I'm PRAYING this fixes the issue I'm having and there isn't something additional coming into play):doh:

Joined Jan 29, 2017
·
47 Posts
Do you guys think i could go with dual alts if the secondary was a self exciting model? I know the thread is old but just wanted a possible answer from the gurus.

I hate the look of that smashed cold side CAC :tard:
S

Sbeezy said:
Do you guys think i could go with dual alts if the secondary was a self exciting model? I know the thread is old but just wanted a possible answer from the gurus.
Click to expand...

I second that! I did what is explained but ecm is still trying to swap over to secondary alternator after first shut off? I really need to fix this as I use truck for work. Can I use jump wire from yellow to gr wire so that it will constantly switch on Main alternator? Or I need to see pictures that I can't see

Joined Aug 30, 2017
·
11 Posts
This is off subject so I apologize now lol. I'm about to do compounds on my truck that has dual alternators, but I just did alternator delete. After searching the internet I saw a few that say they did, so I followed their steps. But it's not working at all! Battery light on and only charged till I cut truck off and now nothing. Have y'all ever done the alternator delete for compounds?

Sent from my SM-G935V using Tapatalk

nighthawk285 said:
Did you change the plug configuration on the passenger fender-well?
Click to expand...

Yes I did I can post pictures if need be. I just put gr/red loop wire back in same spot as gr/red on female end as seen in another post. When I cut truck on all seemed good but battery light was on while charging 14v drove truck about 30 miles and cut it off. When I cranked back up the alternator would not work