It started one morning when I was allowing the truck to "warm up" (it was in the 90's but didn't want to just jump in and drive). The truck was idling fine - then I felt a shutter - the truck started idling funny and the wrench light came on.
I immediately cut the truck off and waited a few minutes to fire it back up. It fired up perfectly fine and idled normal. The wrench light was on and I had absolutely NO throttle. it was throwing a P2285 code (ICP sensor low) - but it was throwing that, or similar, code before that (ICP was unplugged).

After a few days of the truck sitting idle, I finally broke out the multimeter and started checking wires. I found that the 5V reference wire was only reading 1V, or less. I unplugged the harness from the PCM and checked the #36 pinout to see what kind of voltage I was getting. It was showing 5 volts. Plugged the harness back in and checked the wire again...<1V again.

I unplugged the 3 sensors on the reference line (EBP, ICP and EGR actuator(which is deleted)). I then checked the reference wire at the connector again - this time it had 5 volts. I started plugging the sensors back in. After each one, I would check the voltage at the wire again. Each time, it showed 5 volts - even when I had everything hooked back up. So, I started thinking that one of the sensor plugs may have gotten loose.

Got in the truck, @koe O, I cleared the codes with my cheep code reader (Walmart for less than $30). Codes cleared (forgot to mention that I also replaced the ICP with OEM and replaced the pigtails as well - triple checked the wiring). No dash lights and the truck idled fine and it had throttle response.

However, while driving, I noticed that the turbo wasn't spooling like it should. It was delayed. I clipped the reference wire and everything seems to act fine. I know that this is a big NONO, but I had to get the truck home and I was worried about the turbo going bad.

Since then, I have followed all of djmaguire 's tips and links. I have searched the wire harness for chafed spots. Found several week spots in the loom, but no wires were cut into or exposed.

With the reference wire hooked back up, I immediately get the wrench light and no throttle response. Again, I unplug all the sensors and check the wire - 5V. Start plugging in each sensor and checking after each one. Continued to get 5V after each one was hooked up. So, I started pushing/gently pulling on the harness while watching the voltmeter.

i found one spot that would make the meter drop down to around 1 volt - this was right around the area where the air intake crosses the main harness right in front of the FICM. So, i started stripping the loom off and checking the wires again.

The loom was brittle and broke in several places. I still did not find any cut or chafed wires. I reinstalled what loom I could and then wrapped everything with electrical tape. then I added aluminum duct tape (like for HVAC) in the locations where the harness was in contact with any of the engine parts (two reasons: heat shield and this tape scratches very easy - if there was a chafe point, I would surely find it).

Cleared any codes and tried starting the truck...crank-no-start..repeatedly. Used FORScan to check everything out and found that all sensors were reporting off and the FICM had no voltage.

This weekend, I unwrapped all the wires and inspected once again. Still not seeing a chafed wire. Checked all the plugs on the FICM. Pulled the PCM connector again and checked out the receivers in the plug. Plugged everything back up and cleared the codes.

Truck started right up and had, seemingly, full function. However, I noticed the boost lag again while driving to work. I disconnected the reference wire to get back home.

I have posted these scenarios before. Some have mentioned the EBP (I also replaced the pigtail on the EBP and ECT). But, from what I have read, a bad EBP should not cause a wrench light and cause the truck to go in to limp mode.

Is it possible that the EBP is the problem?? What would be the definitive test to prove so?

My OBDII bluetooth plugin is not working - so I can't post my Torque Pro data. My son is off at school with his laptop (only laptop at the house), so I can't get the FORScan date until Tuesday night. But, what would I be looking for?
BigDeddie is offline
Quote Quick Reply
post #2 of 14 Old 11-04-2019, 04:02 PM
7.3lf550
Compression Ignition Addict

2-Check all values with KOER 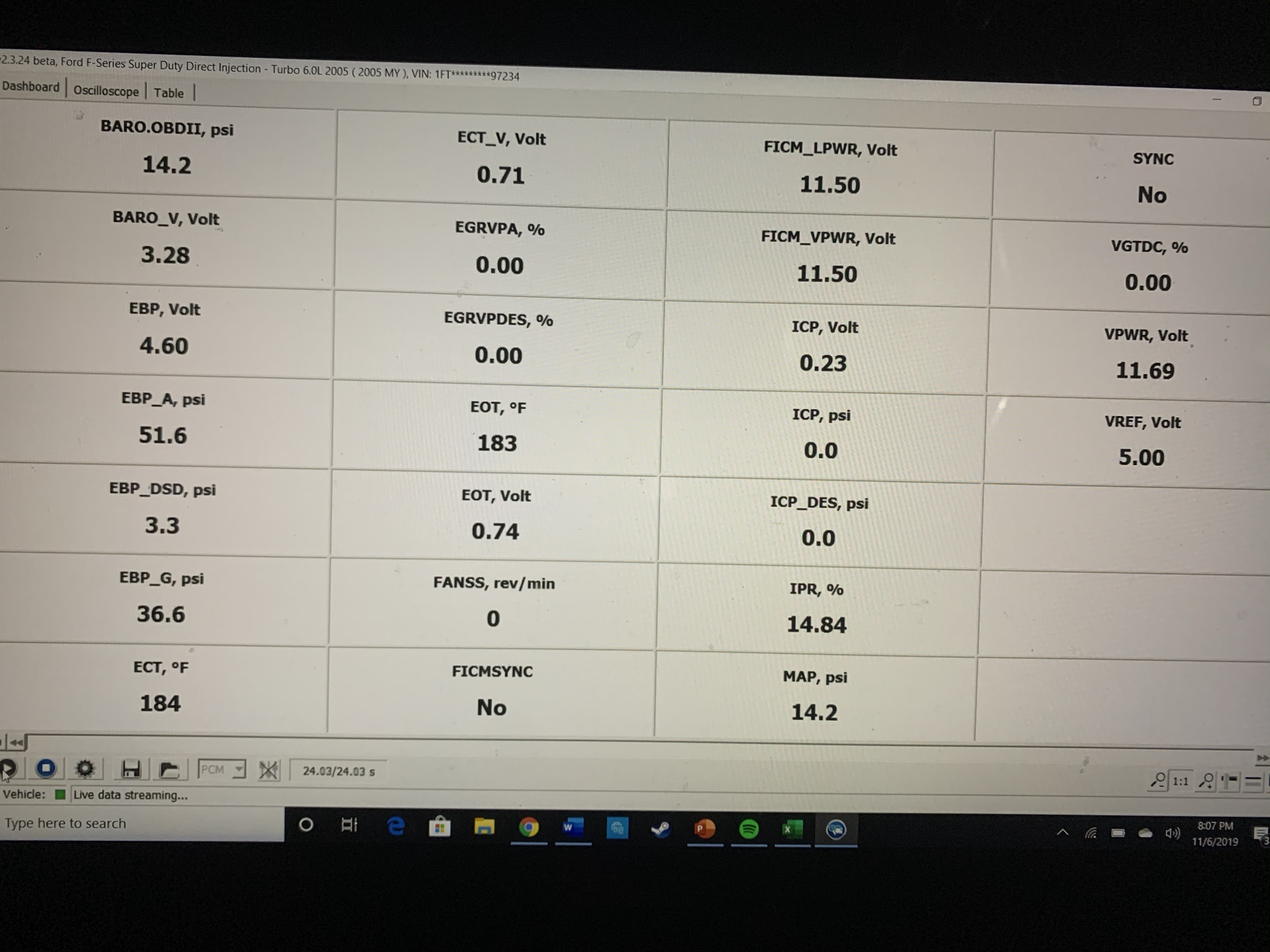 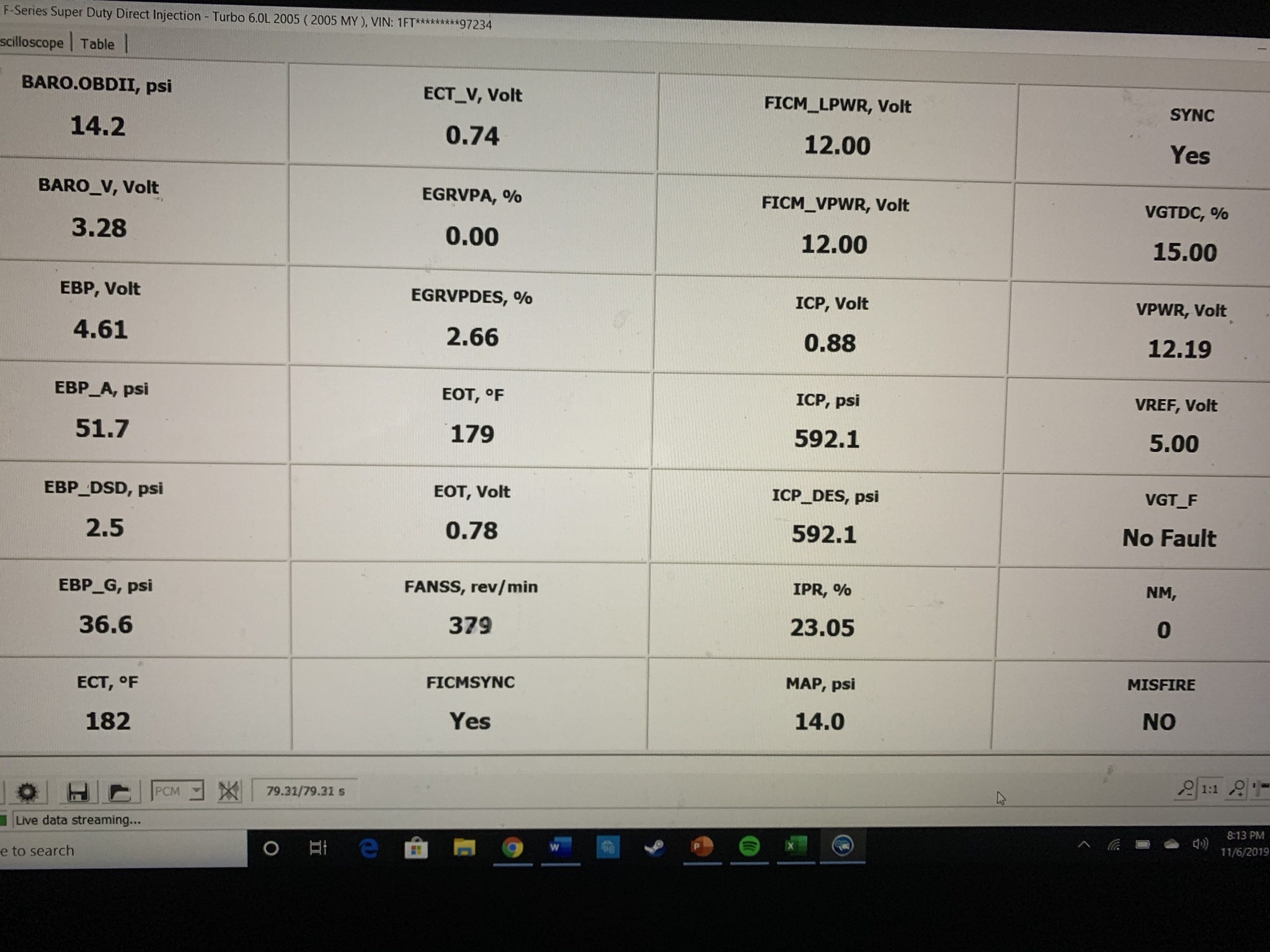 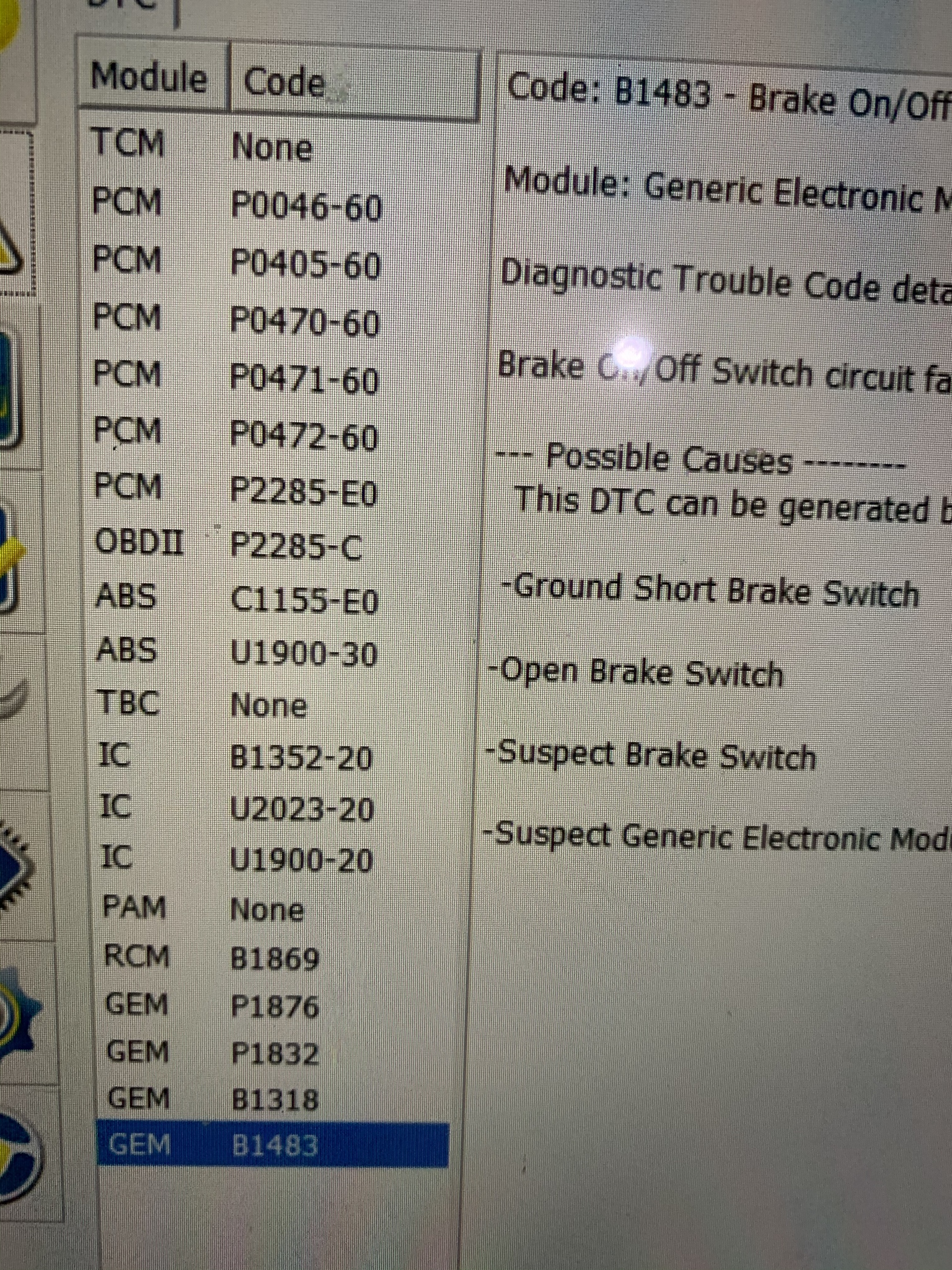 Have you cleared the codes, and see what new ones popup?
bismic likes this.
In my defense, I was unsupervised
.
2006 F250 Lariat FX4 cclb
Torque Pro and OBDLink MX bluetooth monitor
General note:
For all those wanting a premium silicone sealer Kubota 70000-73764 is the best your gonna find. This is a hybrid gray silicone that uses solvent rather than acid to start the curing reaction, this makes it safe for aluminum and and any surface that involves coolant.
Hydro is offline
Quote Quick Reply
post #9 of 14 Old 11-06-2019, 06:57 PM
bismic
Compression Ignition Addict

I can't tell you how many people just don't want to try running w/ the EBP unplugged. Not sure why that is ...

I can't tell you how many people just don't want to try running w/ the EBP unplugged. Not sure why that is ...

Well bismic...it seems that you may have been right all along. I reconnected the 5v reference wire and then unplugged the EBP, went to KOEO and cleared all the codes.

Fired the truck up and went for a drive. Everything acted the way it is supposed to. The turbo spooled when it was supposed to. I was showing the right boost psi.

I have driven the truck about 75 miles with it like this so far and I still don't have a CEL - shouldn't the lack of EBP throw a code? I know I had one when I unplugged the ICP. My next step (tonight) is to reconnect the FORScan and see what it says this time.

Just out of curiosity, what the harm, or possible damage, of running with the EBP unplugged for a few days? I am not looking at a long term thing, just until the new sensor comes in. I drive 54 miles round trip to work and nowhere else.
kmapro is offline
Quote Quick Reply